They say Zoya Akhtar’s films are about the pertinent pains of the rich and high flying. What a lot of us overlook in them are dense threads of passion, dysfunctionality and individuals breaking free from internal, familial and societal clutters. With her latest feature, Gully Boy, Zoya frees herself from the socio-economic band that might be her comfort zone but solely on the surface. The characteristics and familiar strokes of the classic Zoya Akhtar universe remain beautifully intact.

Gully Boy, for starters, is highly revelatory despite its customary underdog victory mould. However, to my surprise, the film effectively documents its lead character and his abused, unsettling existence in Mumbai’s Dharavi slum district to becoming one of the biggest names in India’s rap scene. Narrated sans jittery non-linear patterns, these portions were also essential in accustoming a regular viewer to the film’s crux which involves music as a channel of emotions. Also because rap in itself is no well-identified school of music that, probably, an average Indian would have grown up admiring as an art form. Therefore, I could only chuckle when the lead character’s aunt advises him, “If you want to do music only, then why not ‘ghazal’?”

As Gully Boy evolves through its zestful, original characters, we tend to sieve the film through elements that are common in Zoya’s universe. Therefore, besides being the journey for its title character Murad (Ranveer Singh), the film is a realistic prism on contemporary romantic relationships. It is also about lasting friendships that are all different from each other and, hence, intimate to the leading man. In addition, there is a commentary on India’s fundamentally flawed family system, which is in dire need of a rescue.

If we look at Gully Boy through the relationship filter, we meet Safeena (Alia Bhatt) who is one of the film’s most colourful people. Coming from a relatively well-off family, she dreams of two things in life – to be a practising surgeon and to marry Murad – in that order. She is selfish, possessive and makes no bones to express it to the world – even at cost of landing herself up in the cop station or of curtailing her own independence. Safeena may not be the biggest cheerleader at Murad’s gigs but it is her presence at the venue that gives him stability. That way, Gully Boy is also about Safeena’s coming-of-age. “I want to go out. Party with friends. Wear lipstick, wear makeup. Talk to guys, when you (the family) are around. I want to bring them home like my friend Suhani does,” Safeena rues to her conservative Muslim parents, only to get slapped up by her mother (Sheeba Chadda, terrific as always). The film does liberate her as the story closes. Yet, there is no magical transformation that the family or the society undergoes.

Then we see Murad and a string of enduring friendships. The moment we see MC Sher (Siddhant Chaturvedi) make an entry, we fear the development of an archaic trajectory – that of a friendship turned sour en route to a journey up the ladder of success. That does not happen. Sher remains a positive, ego-less mentor whose affection for Murad is not quantified by the need for a reason. Sher himself gets a subtly expressed story that could well have a spin-off for itself. We learn that it is for a reason that the man chooses to vent his rebellion through music and poetry.

Murad’s squabbling equation with his drug-peddler friend Moin (Vijay Varma) is another rock-solid angle that the screenplay explores. These two men belong to the same stratum of society yet breed differing personal values. While Murad believes that it is wrong to involve young children in Moin’s illicit activities, the latter is quick to add that he feeds them, and the sermons shall be served duly to the parents who leave children astray. Two points of view, each giving you solid reasons to ponder. The last leg to this unbreakable bond is perhaps the most emotional moment in the film, adding how minutely observant are the writers of the film’s atmosphere and the needs of its textured inhabitants.

We also see Sky (Kalki Koechlin), a music producer and a student at Berkley’s who develops a liking for Murad. In a fleeting episode, we observe how two universes collide – the varying versions of freedom and liberation for Murad and Sky. Through this supple, balanced and brief friendship, Gully Boy principally explores class differences. “Why are you attracted to me?” wonders Murad. Sky retorts how being an artist makes him an attractive proposition by default. How effectively it contradicts with his unworthy state in his very own home. Besides that, Sky’s existence in the plot does not add much value to Murad’s journey. 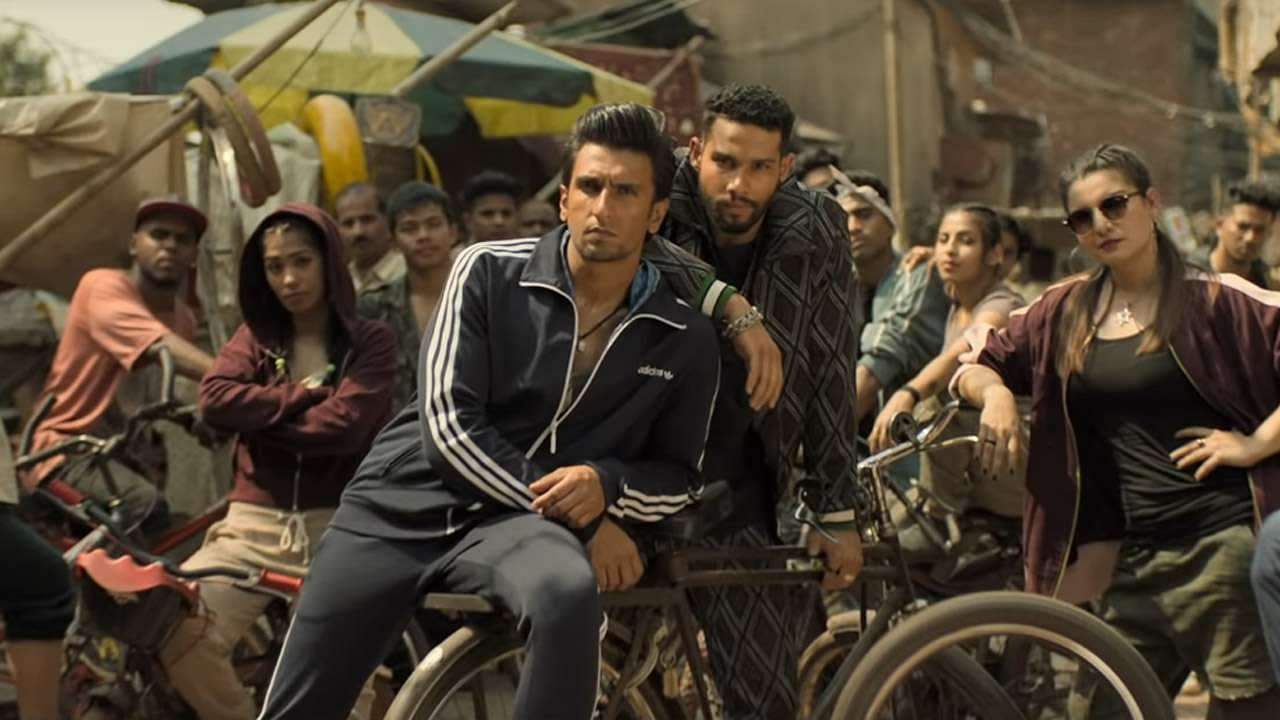 The family network in Gully Boy is one that feels the most acquainted – the traditional setup of the lower class that suffers everyday abuse and are also resistant to move out if it. This is the same clan that opposes children from pursuing what they are good at and instead prefers the steady income of a conventional office job. The father’s remarriage passage is an interesting angle that dissects the changed family dynamics to a T. It is worthy of a chuckle when the father demands his young son to wear the shirt in his stepmother’s presence. All of it contributes to designing a family arrangement that is rooted in gender bias that, by and large, is acceptable to the social cluster they belong to. Having said that, the conclusion to the family chapter is way too simplistic as the parents strangely unite towards the end – only to coax Murad to resume the job at his uncle’s workplace. The latter episode is a poor throwback on Imtiaz Ali’s Tamasha that seldom soars.

In a film that predominantly is a man’s journey to stardom and multitudes of other realms, it is imaginable how Murad derives the maximum out of the film’s potentials. Every sub-plot, every individual journey collide or converge to what is his orbit. Zoya Akhtar delivers a spate of scenes where the leading man is the singular person in focus. There is this powerful scene – that is also staged and shot with great élan (DOP: Jay Oza) – where Murad is seen outside the venue where his client is partying. It is the New Year’s Eve and the sound of music urges him to venture close to the entry, only to be shown his place by the security guard. A gesture that is subtle yet firm enough for Murad to head to the car and bleed his frustrations out in form of rap. Zoya gives us a numbing shot where he is passionately in the process, as the car lies listless in the nattily lit parking lot. In a later scene, we see the man’s inability to express his sympathies as his high society client sobs all the way from a club to her destination. Instead, we get a thunderous poetry piece (by Javed Akhtar) where his concern for the woman finds a fitting outlet.

Loosely based on popular Indian rappers Naezy and DIVINE’s stories, Zoya Akhtar’s film is in the meta zone, taking enough liberties to make the proceedings cinematic. The characters germinate from original grounds with their own sets of rights and wrongs. They also remind us of every Zoya Akhtar film with characters unable to embrace their real callings. Ranveer Singh as the ‘Gully Boy’ Murad Sheikh is in his Dil Dhadakne Do mode. Intense and effective throughout, the film makes us wonder if Zoya is the only filmmaker who channelizes his energies in right volumes. Alia Bhatt is at her crackling best in a role that is right up her alley. Be it with her impulses or the tenacity to nail one-liners, Bhatt proves why she is on the top of the heap. Siddhant Chaturdevi delivers one of the most astounding debuts Hindi cinema has seen in years. The youngster has a winsome screen presence and his attitude is infectious. I was left dumbstruck with the reactions that he gives in the pre-climactic rap stage face off. Chaturvedi’s face reflects loss and insult to equal measures and, at the same time, he cannot stop cheering for his protégée, Murad. What a find!

Gully Boy, at the end of the day, is a music-based film and as many would fear, rap may not be everyone’s cup of tea. The writers (Zoya Akhtar, Reema Kagti) might as well belong to Murad’s mistress’s cluster – those who party in uptown pubs and would have known cream artists from the world over. Through their acutely balanced screenplay (designed in consultation with real gully rappers) in place, the emotions seldom feel put-on as they touch the issues of those in Mumbai’s gritty underbellies. Zoya and Reema also pay rapt attention to individual character arcs. For instance, it upsets us gravely when the grandmother (Jyoti Subhash) approves of the misogyny that takes place around her. Still, the film gives us a moment to empathize with her too – her loss, her relief upon finding her dear ones back. In a carefully crafted end credit chapter, Gully Boy delivers closures – one by one. It might feel excessively in the fairy tale zone to many. To me, personally, there could not have been a better way to end the film with. And to all those who dig message-driven cinema, Gully Boy hits you right in the gut with lines as sly as, “Tera gaana tu nahi gaa sakta to main kaiko gaun?”